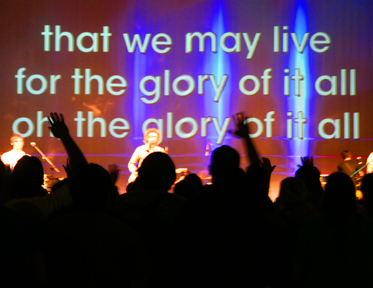 Worship In The Key Of Home I can tell already that I’m going feel unfinished and dissatisfied with this post – but here goes. One of the biggest personal observations that I made in the US, was this nagging sensation that some component of ‘gathered singing worship’ was missing.

I’m reducing it down to this – worship is not only key to community, but a context of community is key to worship. The role of local narrative is vitally important to some (not exclusive) aspects of worship as the people of God.

It started in Chicago with a sense of disconnection from ‘local’ songs like Mighty to Save & Hosanna being sung by 2500 strangers. The song was familiar, but the story was not. If I partake in the metanarrative/grand narrative by virtue of my belonging in the kingdom, I still remain connected to my local narrative. At first I put the sense of disconnection down to being away from home and still singing songs that I was so connected to.

However, in Indianapolis, I sang songs that were even older, with which I had personal, individual narrative to connect with and I stood with family in a foreign church worship environment. This too had it’s conflicts and strange rumblings.

In St Louis, I started to dig back into my “Worship in Context” studies and ruminating over the role of gathered worship in the life of the Israelites both in local and grand narrative. I realised the significance of connecting the songs of praise/lament/sorrow/supplication to our narrative in local scale. To gather as the ‘people of God’ but as relative strangers serves a joyous purpose of extravagant praise, but left something amiss in my heart. It felt somehow incomplete.

As I made friends and started to share my individual story with people around me, we collectively built some ‘local’ narrative. The physicality that the worship leaders called for – the dancing, clapping, shoulder & hand connections began to feel more comfortable. After all, NYWC isn’t just a corporate gathering – there is already a commonality to the local narrative of youthworkers around the globe.

So what does this mean? Well, maybe nothing new except to say that if I worship as one, then my ‘worship’ can take any form, indulging in the individual narrative, bathing in romance and wonder. But when I worship in community, I am now going to abandon my ‘one-ness’.. when I worship with people now, gathered worship is going to become exactly that.. I’m going to look for ‘our’ stories as well as drawing attention to ‘the’ Story. What will that mean? I gosh-golly don’t know.

If nothing else, my “with-worship” has to live up to the challenge of telling local narrative with it’s struggle, celebration, sorrow and fullness. Like any good story, “with-worship” must have a sense of connecting people and ideas, with darkness and light in contrast.

What about “all-worship”? The impending festival season approaches with annual pilgrimages planned, culminating in the Parachute festival at the end of January. Do the numbers determine the role of ‘my-narrative”, “our-narrative” and “the-narrative”? I don’t think so – but I’m still trying to answer the questions around how that could or ought to look.

I think that smaller faith communities have much more of an advantage here – the intimacy of the “our-narrative” seems much more accessible on a smaller scale, but the bigger question is how do I implement a connection between ‘worship liturgy with a lot of singing’ and the active, fluid, responsive “our-narrative” of the church community.